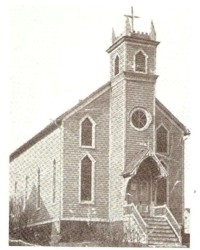 In 1875, with the Catholic population growing in Pleasantville, Samuel Shapter, a New York distiller, donated the property at the corner of Bedford Road and Tompkins Avenue to be used for a church. His only stipulation: it had to be named “Church of the Holy Innocents.” One year later the new church was dedicated as a mission out of Mount Kisco. It took until 1894, when it was clear of debt, for Holy Innocents to gain parish status.

From 1897 to 1915, priests from the Dominican Province of Lyons served Holy Innocents Parish. It was during this time that the first steps to provide Catholic school education were made. Father Regis Gerest started holding classes around the dining room table in the rectory. As the number of students grew, two Dominican sisters came to teach and the school moved to Harold Wright’s home at Bedford Road and Ashland Avenue. In 1900 the school, known as St Thomas School, moved to a house donated by George Mackey. It was located on Tompkins Avenue at the rear of the rectory. With the addition of a few room, it served as both convent and school for almost ten years.

As the new mission church was being born, All Souls Cemetery on Marble Avenue was evolving as a final resting place for area Catholics. According to a cemetery deed, the Archdiocese of New York purchased the property from the Roselle family in 1882 and Holy Innocents immediately began to use the land as a burial site. However, further research discloses two date discrepancies. First, a gravestone has an 1877 inscription. Second, the sign at the entrance to the cemetery indicates it was established in 1861. Back then the land belonged to a local resident, Isaac Thorn. Despite extensive research by parishioners, the disparity between the dates remains an unresolved puzzle. 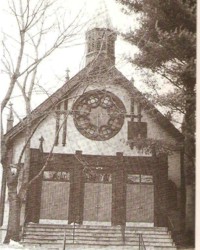 On February 12, 1912, most of the Church and the entire rectory were destroyed by fire. However, from out of the ashes, came a “season of rebirth.” A new Tudor style church and rectory was designed to accommodate a burgeoning parish. The bell from the original church was salvaged and placed in the new building to signal parishioners to worship.

An important change occurred in 1915 when the French Dominicans were replaced by Dominicans of the St. Joseph Province. One French Dominican remained, Fr. Alexander Mercier. He gave informal religious instruction and celebrated Mass, in a store front near Our Lady of Pompeii’s current location, for the growing Italian population which had begun settling in Pleasantville during the early 1900’s.

Our Lady of Pompeii Chapel was built in fulfillment of a promise made by Fr. Mercier.  He was in Italy when the US entered World War I.  Since he was not a US citizen, he had little hope of returning to America.  He prayed to Our Lady of Pompeii and promised to build a chapel in her name if he could be allowed to 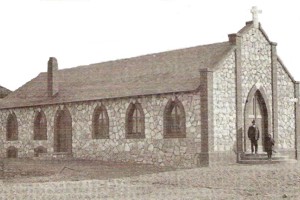 return to America. Upon his return to America, he held true to his promise.  The property on which the chapel is built were given to Fr. Mercier by Mother Rose Lathrop, daughter of Nathaniel Hawthorne and founder of the Sisters of Rosary Hill in Hawthorne. Work began with the help of many people whom he served.  Stone was hauled from local quarry, contractors were hired and most of the men of the parish volunteered their services in their free time. In the Spring of 1918, Father Mercier offered the first mass and stood before Our Lady of Pompeii as its doors opened for the first time.  In 1922 the bell tower was added to the chapel and in 1925 the hall was built for classes in religious instruction and for sewing classes for the girls. In 1928, Fr. Mercier died while on a visit to his home Provence of Lyons in France. The following year, becuase of its proximity to Holy Innocents, Our Lady of Pompeii became a Mission Chapel of Holy Innocents.

Following World War II the parish expanded and once again St. Thomas School outgrew its quarters. In 1955 the school moved to a modern facility at the corner of Great Oak Lane and Bedford Road where it would function until decreased enrollment caused it to close in 1972. For the next fifteen years, it would provide a home for the CCD program and other parish functions until it was sold to the Girl Scouts of America in 1985.

Toward the end of the 1970’s, the Parish Council Planning Committee was asked to assess the need for repairs on all parish buildings. An architect’s report indicated that major work was necessary and that there were structural and electrical problems in the church edifice. After painstaking analysis, the decision was made in 1982 to build a new church, educational and meeting facility on the site of the existing church and the rectory was to be renovated.

In November, 1985, the official period of transition began. When the Girl Scouts purchased the school building they agreed to permit the parish to use the gymnasium for Mass pending the completion of the new church. As the old building was dismantled certain furnishings were preserved: the altar table, the stained glass windows, the stations of the cross and the bell which was part of the first church. Construction proceeded rapidly and on October 2, 1987 the religious education wing was opened and a few weeks later the first Masses were held in the new church.

All the prior planning and research was reflected in the end result. The new church was a brilliant combination of past and present. A soaring roof line and modern circular design created an open, contemporary atmosphere. The stained glass windows from the old church were carefully incorporated into the new frame. The large rose window had found its new home amidst the rafters. The revered altar and tabernacle from the old building were polished as good as new to serve as the altar of reservation at the rear of the church. The stations of the cross were also restored and took their place in their new home. The bell purchased in 1898 was again calling all to come and share in the family of the church. 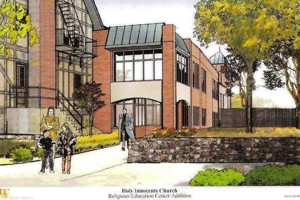 In 2003 Holy Innocents embarked on an ambitious program to renovate and improve our facilities once again. The number of students in our Religious Education program had increased by 75% since the construction of the original Religious Education wing. A two story addition was added providing new classrooms and meeting space. Our Lady of Pompeii was in need of repairs including restoration of the bell tower and updating of the social hall and church. To accommodate the overflow at many of our Masses, a retractable wall was installed separating the Social Hall and Holy Innocents Church and a new sound system was added. The rectory was also updated with new windows and carpeting. 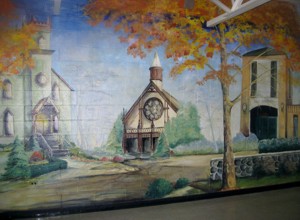 Of course, a parish is not defined by its buildings. The generosity and dedication of parishioners, its service to the community, the preaching and teaching by word and example, the celebration of the sacraments, these are the life of the parish. We are grateful to our predecessors who gave us this solid foundation to build upon. It really is all about building up the Kingdom of God!

HOW CAN I HELP MY PARISH AND MY PASTOR…By my Prayers and my Giving.

WeShare is an automatic giving program that debits your credit/debit card or savings/checking bank account for donations to the church.

EMERGENCY LINE:  If you ever need a priest in an emergency after office hours, our parish has an emergency line: 914.340.4486
We are always happy to bring you the Sacraments in your time of need.

Our Lady of Pompeii Chapel
Sunday: 10:00 am
Tuesday and Thursday:  5:30 PM
OLP is only open for these Masses.

A weekly Holy Hour with exposition of the Blessed Sacrament is held every Tuesday evening from 7-8 pm at Holy Innocents. Confessions can be heard during the Holy Hour when priests are available.

Also, every First Friday of the Month, Eucharistic Adoration is held from 12:45 pm Mass until the 6:00 pm Candlelit Mass at Holy Innocents.

All are welcome and encouraged to join for these opportunities for resting in Our Lord’s Eucharistic Presence.

All other times by request. Please call the office for an appointment.

If you would like to receive Holy Communion in your home, please let us know by calling the parish office to coordinate regular visits.

The latest from Pope Francis